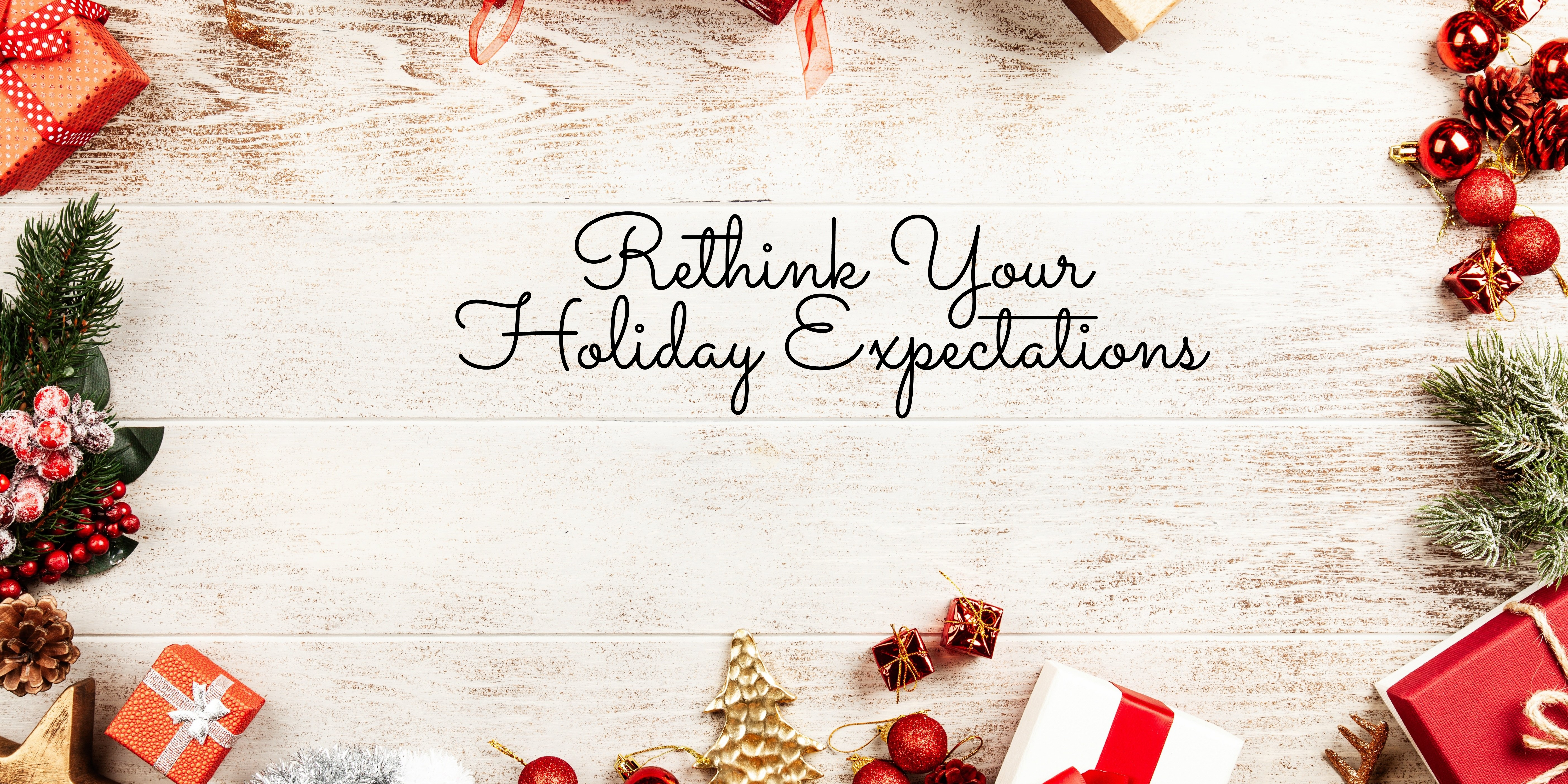 “Truly , truly, I say to you unless a grain of wheat falls into the earth and dies, it remains alone; but if it dies, it bears much fruit.” — John 12:24

I have a quote visible in my kitchen that says “What screws us up most in life is the picture in our head of how it is supposed to be.” There is no more truer statement than that during these upcoming Holidays. The Holidays bring on a special stress of their own because everyone has in their head how they think it ought to go down and then it doesn’t go that way and battles are unknowingly staged.

Families not in the same state, country or continent arrive travel stressed, especially now because of several years of off the charts reaction to COVID. Add to that, dealing with restless kids in the car or plane coupled with worrying of weather conditions.

Families not of the same faith journey ruminate to themselves that no matter what they say in simple sharing will light a flash point in someone’s soul. Families with all kinds of veiled wounds of the body or soul that they cannot seem to heal no matter how much therapy or spiritual help they have sought, walk in the door very needy, angry or despairing.

Then there are what I call the ‘piss ants’ of life that advance en mass on top of the bigger challenges that have been constantly threatening and eroding familial relationships.

“I hate turkey. I don’t eat pork. I am vegan. I am paleo. I am on a diet. I don’t drink. I need a drink(s). I don’t like my middle sister. I don’t clean up after I cook. I don’t cook. I won’t cook. My stomach hurts. I am fat. I wish Jane would stop putting that crap in the dressing. Why does the TV have to be on 24-7? Why did she get more gifts? I don’t do gifts. I hate playing games. Uncle Vern prays too long and too loud. Why don’t we ever pray? My two year old is waking up now.” That last statement will clear out a house in seconds flat!

Not surprisingly the latter paragraph of human idiosyncrasies is what tips the scales and everyone is in complete bewilderment of how when 80 year old Aunt Marion simply says “The gravy is a bit salty” that a epic battle ensues.

Holidays with my Mother in Law were rough. I was always stepping into something with her and her sister who lived with her. I made coffee one morning in the countertop coffee pot and you would have thought I stabbed her dog by the way she laid into me. Come to find out, they never ran caffeinated anything through that appliance because their best friend Billy and his wife, who lived in another state and visited from time to time, was deathly allergic to caffeine. All I was trying to do was quietly make some decent coffee while everyone else was still in bed. Didn’t know it was a plot to knock off Billy. Believe it or not this is a very common scenario.

Not everyone gathering feels emotionally safe. We usually never intend to start any unpleasantness but because of high expectations, sparse or poor communication, and tender wounded hearts coupled with the ramped up commercialism of the season, somebody gets hurt.

So what to do to deflect the tension and minimize the conflict? Don’t do what you always do. Doing the same thing every single time caters to the same people. Think outside the box. Doing this reaches other family members and what they enjoy and can possibly draw the best out of them changing up the dynamics in a very positive holy way. It also sows seeds of sacrifice, service, care and discovery.

Don’t cook the same food. Stop cooking the tiresome turkey, ham or toasted quinoa with garbanzo beans or whatever traditional food you cook. Change up the menu. The online options for amazing doable feasts are there just for you. One year for Easter I did Coconut Shrimp, some kind of side all three of us liked (Husband Jeff and college bound daughter Heather) and homemade coconut cream cake. We all like coconut. I don’t bake ‘pretty’ so the cake looked absolutely awful but tasted amazing and elicited an afternoon of good hearted teasing. We tossed our cat Buster in the car and headed for our land out in the country sitting on several blankets dining happily on it all in the warm spring air keeping our cat in sight while he timidly roamed. Our daughter to this day (she is a chef now) talks about that awesome non-traditional food day. Sacrifice, service, care and discovery.

Let someone else host or venture out somewhere else. Stop thinking it has to be at your house or in anyone’s house for that matter. This one is a bit trickier due to the size of your gatherings, weather concerns, Holiday hours and current COVID restrictions. Sit quietly and give it some prayer and thought. Listen to what our Lord is telling you. He is talking to you about everyone you love that is gathering. Sit in Adoration or your favorite prayer spot and ask Him. “Dear God, who of my family/friends needs this change of location?” He will tell you. He loves them more than you. They belong to Him first.

One year my out of state brother and wife offered to host Thanksgiving. I didn’t foresee it would be such a gift to me. Normally when at my Dad’s house (they live down the road from each other), I always help in the kitchen. I feel guilty/lazy/selfish if I don’t plant myself in there and do whatever food action needs to be done. They took that off my plate. It created a space of ‘relax’ so I could visit with other family members I never get a chance to visit with since I am dutifully bent. I also learned much about my brother’s family and what they really like to eat and how they like to live out the Holidays. What a blessed revealing gift to me that was to me.

Maybe you need to rent out a space which creates neutral ground, cater the food or ask if anyone wants to bring their favorite food? With you not center stage with your superb culinary skills, maybe that one person who never brings anything will showcase what they love to eat. You will be enlightened. The whole experience will invoke sacrifice, service, care and discovery.

Change the agenda. Games. Movies. Dialogue. Which one do you frequently foster? Maybe you need to shut off screens and introduce some games. Maybe you are the one who always plays games and instead needs to foster an environment of safe dialogue without the gaming competition. Maybe you are the one who all these years said “Turn off that damn television, stop looking at your phone and sit and talk to me.” Well maybe for this generation you need to watch one thing that is their motivating spiritual narrative. How amazing would that be if that one child — that one sibling who drives you nuts who never laughs, smiles and seldom talks, becomes happily animated because a movie spoke their heart. Bishop Barron does a review on varying movies. One he reviewed that was memorable for us was The Quiet Place. A sacred theme was running in the script without it being a cheesy in your face Christian movie. Sacrifice, service, care and discovery.

Invite friends to your gatherings. No matter who you invite to your traditional gatherings, they will change up the course of the day. They can inadvertently redirect volatile emotional reactions. They pad the drama. They can also unknowingly introduce you into a realm of virtue where you were previously lacking. Die to your expectations. Grow some courage.  Shake up your gatherings and invite your friends. All souls present will benefit in some way if not immediately then later when you all least expect it.

My Dad and his wife invited a couple to a family gathering close to Father’s Day. Their son had committed suicide about a month earlier. Not only were Jeff and I given a chance to listen to the whole story of how their son ended his life and see how compassionate and caring Dad and his wife were, but all present voluntarily suspended their issues to the greater tragedy offering comfort and encouragement to the deeply grieving parents. Sacrifice, service, care and discovery.

May God Bless you ‘until you want no more’ for the courage of trying any of this.