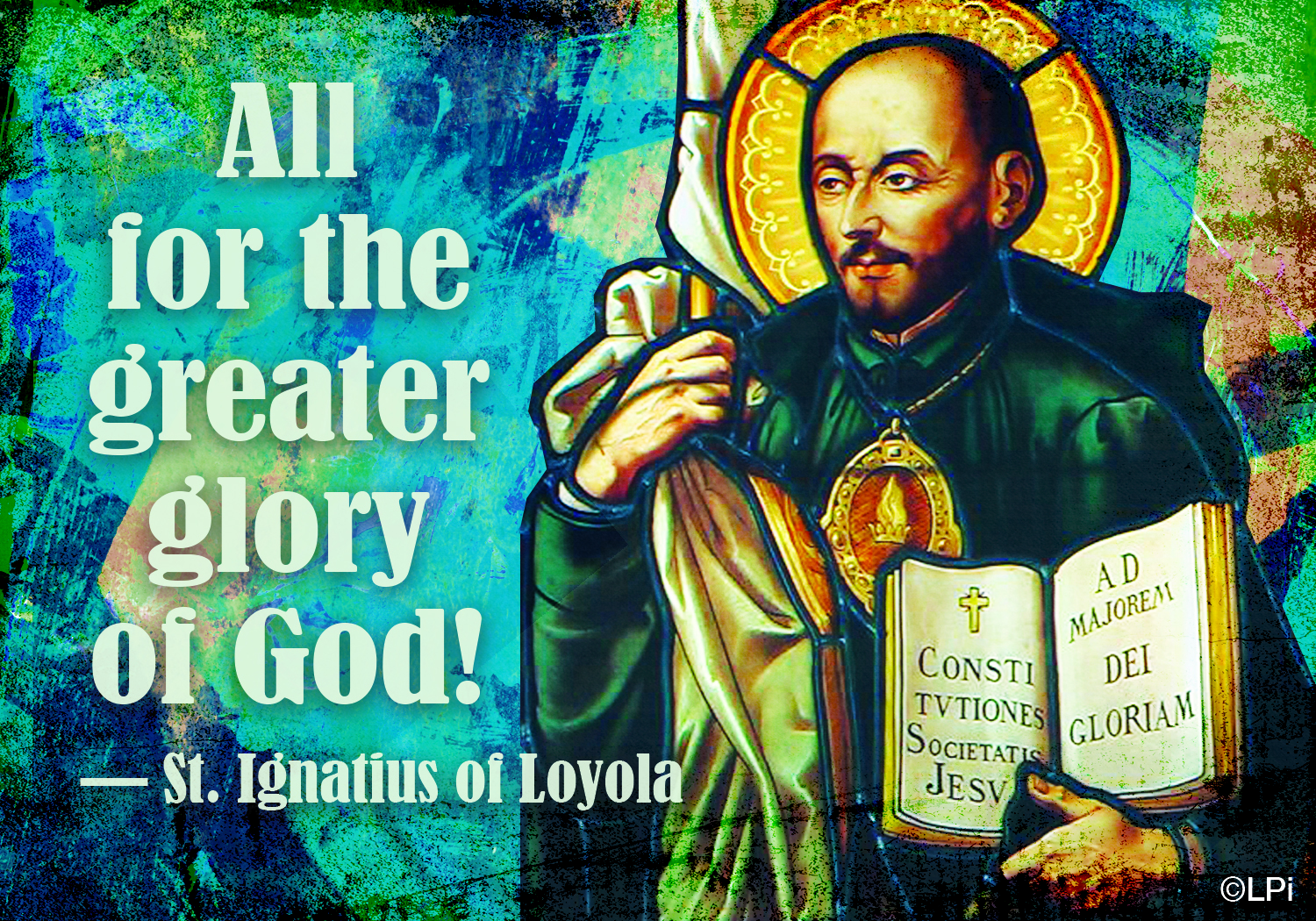 On July 31st, Holy Mother Church celebrates the feast day of St. Ignatius of Loyola, founder of the Society of Jesus and writer of the Spiritual Exercises. Within the context of the American experience, the Jesuits are mostly known for colleges and universities with a rich basketball tradition such as Georgetown, Marquette, Xavier, Gonzaga, and Creighton. The values of the Jesuits, begun by their founder, include much more than nailing a fade-away from the top of the key.

St. Ignatius was born into a large family in northern Spain. From an early age, he was enamored by the military and left to become a knight. He was a hot head who loved to duel, and loved the company of women as well. He was a brave soldier who fought in many battles. While fighting the Battle of Pamplona, his leg was shattered by a cannon ball. He was carried back to the family castle and underwent numerous surgeries to splint and repair his leg. (Mind you, these surgeries took place without anesthesia.) While recovering, St. Ignatius was without his favorite material to read: works of heroic knights winning glory in a battle and winning the hearts of many maidens. His sister had left him two books – one on Jesus and another on the lives of the saints. The books profoundly moved the recovering soldier, and after his recovery he made a pilgrimage to the Holy Land before moving to Paris to study. All during this time, he worked on what would become the Spiritual Exercises. He would eventually found the Jesuits in 1539-1540 with 7 companions from all walks of life.

One of the hallmarks of the Jesuit order is their vow of obedience to the Holy Father and his successors, and this obedience leads the order around the world. Another key hallmark of the Jesuits is education; as they were founded during the height of the Protestant Reformation, the members of the order were and are highly educated. This led the Jesuits to found schools throughout the world.

St. Ignatius died in Rome on July 31st, 1556 in a simple room at what is still the headquarters for the Jesuit order. I fortunately was able to visit that room. On the day I was able to go, the museum and the room where the saint died were closed because a large group was coming in for Mass in the adjourning chapel. The Jesuit at the door recognized Creighton on my shirt as a Jesuit institution and allowed me in if I promised to be quick.

As a graduate of a Jesuit university, the hallmarks of the Jesuit order are installed in anyone who wants to absorb them. Around the student center, the charisms of the Jesuit order were written on large banners:
“Men and Women for others”,
“Finding God in all Things”,
“Cura Personalis” care of the whole person,
“magis” striving to do more for Christ and your fellow humans,
and “ad majorem Dei gloriam” for the greater glory of God.
These charisms of the Jesuits and thus of Ignatian spirituality draw us closer to our fellow humans and closer to God. While not everyone can go on a 28-day retreat to experience the Spiritual Exercises, there are many wonderful resources to help anyone grow closer to God through the Ignatius tradition. Locally, we are blessed with Emmaus House that offers programs in the Ignatian tradition.

To wrap up this reflection, I would like to ask you to pray in a very simple, Jesuit way. St. Ignatius realized that we have this amazing God-given gift of imagination. One of the first ways he learned to contemplate his relationship to Jesus was to imagine himself in the Gospel accounts. Please take a few minutes to find your favorite Gospel account and place yourself in the story. Use your imagination for the sound of Jesus’ voice, feel the sunlight and wind on your skin, look around to see what others’ reactions are to what is going on. Take some time for yourself and your relationship to Jesus and use the imagination that got so much exercise in your youth and maybe not so much today. And then go outside and practice those jump shots with your favorite (hopefully Jesuit) school on your shirt.